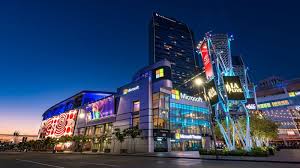 The Electronic Entertainment Expo kicks off today with Microsoft’s Xbox E3 2018 Briefing at 1 p.m. PT, and you can watch the broadcast live here at Variety. The presser is being held at the Microsoft Theater across the street from the convention.

Many of the Xbox exclusives shown at last year’s E3, like “State of Decay 2” and “Sea of Thieves,” have already come out this past year. “Crackdown 3,” meanwhile, has been delayed until February 2019.

“Our fans’ response to the signature antics and explosive gameplay of ‘Crackdown 3’ has been incredible,” Microsoft said in a statement. “To ensure we deliver the experience they deserve, ‘Crackdown 3’ will be launching in Feb. 2019. We look forward to sharing more on [the game] this Sunday during the Xbox E3 2018 briefing.”

As a result, it seems likely we’ll see more from “Crackdown” as well as announcements for new entries in the platform’s flagship properties, such as “Forza Motorsport,” “Gears of War,” and “Halo.”

This year’s E3 is being held this week, from June 12 to June 14, at the Los Angeles Convention Center.

Twitch’s official coverage of the event begins in earnest on Sunday, with Microsoft’s big Xbox showcase starting at 1 p.m. PT.