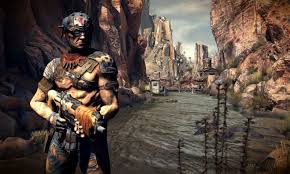 The official Twitter account for id Software’s 2009 shooter “Rage” has only sent out four messages since signing up for the service nearly nine years ago.

And “Rage’s”  last Tweet was sent Wednesday, reacting to a possible leak that a sequel is coming.

In the tongue-in-cheek tweet, “Rage” responded to Walmart Canada with a diagram showing all of the things wrong with the placeholder art found on the retailer’s online store for a “Rage 2” pre-order. The tweet notes that the wrong font is used and that it has the “wrong key art” which certainly could be interpreted as a form of verification.

Bethesda, the publisher and parent company of id Software, then responded with a tweet of its own, simply writing: “Dude.”

As of this writing, the background art for the “Rage” Twitter page is now a picture of that “Rage”-corrected Walmart screen capture.

Earlier Wednesday, Walmart seemingly leaked a number of yet-to-be-announced video games when it posted a slew of pre-orders for titles using blank boxes. Among the titles named were “Gears of War 5,” “Just Cause 4,” and “Rage 2.”